The Ken’s recent article on IFF

My co-founder at Internet Freedom Foundation (IFF), Apar Gupta, recently joined the organization full-time as its first executive director. He put on hold his law practice — he’s an attorney in the Supreme Court — to focus on building IFF up as an effective advocacy organization.

Two other co-founders, Kiran Jonnalagadda and Nikhil Pahwa, believe in an alternate, volunteer-led model to digital rights advocacy. They left their part-time roles at IFF to focus on projects in this model, Speak For Me (SFM) and Kaarana. While we have disagreements on how best to organize, we all share a common vision for digital rights and the same respect and trust for each other that brought us together two years ago. In fact I and another co-founder remain active in both IFF and SFM without issue.

The Ken recently published a story about the changes at IFF, where they largely ignored the news of Apar...

Are you curious what the internet would be like without Net Neutrality? If you’re in India, facebook has been kind enough to give us a preview of this future: Just visit internet.org. 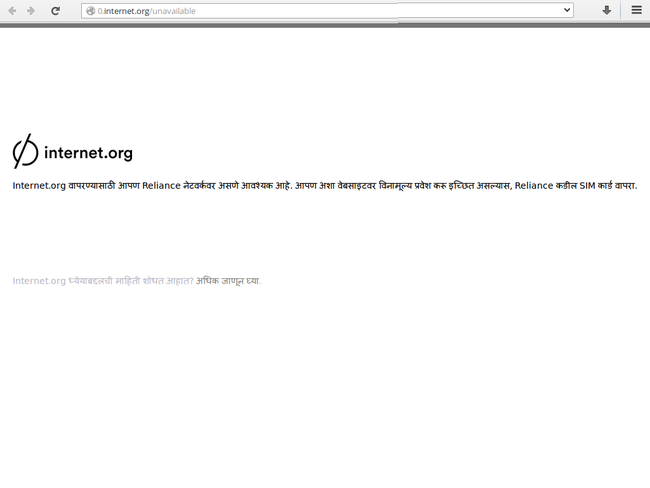 Note that this preview does not work if you have a Reliance mobile connection. If that is the case, please write to Reliance and ask them to fix that.

The text is in Marathi, not Hindi, even if you’re not visiting the page from Maharashtra. It says (roughly) “To use internet.org you require the Reliance network. To visit your favourite websites for free, use a Reliance SIM card.”

Appu and the Bus Operators

A parable on bus neutrality

This post was written in response to arguments raised by Indian ISPs against net neutrality, and their demand that the regulator let them fragment the internet, extort app developers and damage consumer rights. Join the fight for the internet.

This is not Appu

There was nothing remarkable about the Netapur bus stop — a spot on the side of a dusty, broken road, an hour outside the city. There were no houses or shops nearby. Over the fields within walking distance lay four villages. Six buses stopped there in the morning and evening, carrying villagers who had jobs in the city.

It was on one such morning that passengers first saw Appu. A teenager from one of the nearby villages, he was carrying a metal tray with a few small glasses of tea. “Five rupees”, he would tell anyone who glanced his way. He sold eleven glasses of tea on the first morning, and took...

TL;DR: Look at the pictures below and let me know which one you think is better.

I spend most of my waking hours at my laptop, so I tend to think about laptop design a lot. Most of my work day is spent writing code, docs or email, so I care an awful lot about the keyboard. This post is about an extremely compact keyboard layout I’ve been designing. The goals is that the keyboard should:

This is probably an opinionated design; it reflects my priorities and acquired tastes. (I’ve been using ThinkPads for eight years, and I’ve run some kind of Linux most of that time.)

To save space, 5-row keyboards drop...

Things I wish were in the AAP Manifesto, 1: Right to Record

The proliferation of phones that can record audio and video is an enormous opportunity to curb corruption and abuse of power by government officials. AFAIK, there is no law that prevents you from recording your interactions in a government office (except, of course, legitimate security-related places). However, openly recording a government official will result, at the very least, in hostility and refusal to talk; I can easily imagine much worse happening if you attempt to record the police.

I propose a law that affirms your right to record officers of government and police, openly or covertly, whenever they are engaged in any task or interaction that has bearing on their official responsibilities.

If they try to threaten or coerce you to stop, or fail to provide you a service that you are entitled to and cannot offer a credible reason other than your act of recording them, they should...

The AAP manifesto mentioned something about “supplementing the existing first-past-the-post system with proportional representation.” This was a pleasant surprise — it mirrored something I’d discussed with friends in 2010.

In response to a bunch of constraints that people threw up, I had proposed a new voting system called the “Least Additional Members System”. Apologies for the clunky name.

An end to domain squatting

TL:DR; Domain name speculation causes economic harm, and the easiest way to stop it is by increasing prices to $100 a year.

I do not oppose asset speculation in general. In the financial markets speculators provide liquidity and reduce spreads. If you wanted to buy 10 shares of GOOG, you can do it instantly and cheaply in a stock market with lots of speculators but you will struggle to find a counterparty if only long-term investors were allowed to trade. In short, speculators in financial markets generally provide positive economic value.

Domain name speculation is fundamentally different. Currencies, commodities and vanilla securities are fungible — the ¥1 you may buy from one guy is identical to the ¥1 you might buy from someone else. This allows a competitive market to exist.

Buyers in the secondary market for domain names, on the other...

When you’re travelling to a foreign country, your first impression of what it’s like to deal with their government often comes from the design of the immigration cards. This is what visitors to India see:

Do you see the label that says “DD/MM/YY” next to year fields with four boxes? Or the 5-question section “to be filled by foreigners, NRIs, PIOs and OCIs” where three questions have an asterisk that says “Not to be filled by NRIs, PIOs and OCIs? Or the inconsistent labelling, capitalization, box widths and alignment? Overall, it gives visitors a pretty accurate picture of what India’s like.

While the immigration card’s poor design is great for managing expections, I thought it would be an interesting exercise to redesign it. As with any design exercise, identifying the constraints is pretty important. These are the restrictions I identified.